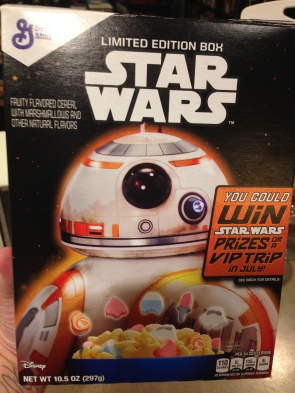 I’ve been doing a lot of travelling for work so there hasn’t been a lot on the cereal front lately. I mean, it’s not like I’ve been staying in hotels with free continental breakfasts and those little plastic cereal-dispensing towers sitting among crappy bagels.
Anyway, time to catch up.
So, surprise surprise, there’s a new Star Wars cereal on the market. It’s imaginatively called “Star Wars”. I believe it comes in boxes with either Darth Vader, Yoda or BB-8 featured on the cover, all of which are a “Limited Edition Box.” WTF is up with that? I know that cereal box collecting is a thing, apparently, but let’s be honest: these days every movie-licensed cereal box is limited edition.
But I’d love to know if somewhere, there’s a General Mills sales guy tracking which box is selling better. You know there is.

Anyway, what’s inside? Another vaguely Captain Crunch tasting cereal with marbits in it. But it’s not as good as Captain Crunch. And frankly, it’s too sweet. But let’s take a look at these marshmallows, shall we? Looks like we’ve got a Stormtrooper helmet on the far right, and then a lightsaber, and then.. wtf is that? Is that supposed to be R2-D2? And some sort of… spaceship? And lastly, on the left, a sad swirly attempt at a BB-8 marshmallow? What the hell am I even looking at here?

If you think that’s bad, the little cereal pieces are even worse. I’m pretty sure there’s a TIE fighter in there, but after that, all bets are off. It’s like they’re not even trying. I can’t make heads or tails of these things. Am I asking too much? Should I crunch and swallow down my Star Wars themed breakfast cereal and be happy with what I’ve got? Screw that, it’s not like it tastes very good, I want easily recognizable crispy crunchy little shapes, Vader be damned. 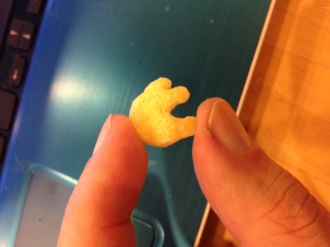 I mean, what the hell is THIS thing? My best guess is that it’s… the Millenium Falcon? I’m really not sure. If I seem a little bitter about all of this, I am.

Not because I’m an especially big Star Wars fan, but because the once upon a time, we got what was only the single best breakfast cereal ever made…

Ladies and gentlemen, power up your hyperdrives and dive back into your memory banks and remember…

Introduced in 1984 and only in production until 1986, C3PO’s was my favorite cereal of all time. When the Star Wars prequels were released we saw a bunch of inferior products like the Star Wars Episode II of 2002, and the also imaginatively named Star Wars cereal of 2005. But C3PO’s, those were the best thing ever. Those little honeyed oat, wheat and corn figure 8’s were the epitome of a sweet breakfast cereal experience, although what the hell the shape had to do with Star Wars I have no idea. But still, my favorite cereal ever.

Or were they?
Because my marbit-addled brain also remembers something called Graham Crackos which were introduced in the late 1970’s which were also little figure eight looking things, and featured a milkman spokesperson. My memory had always equated the two, with C3PO’s simply being a rebranded version of Graham Crackos. Alas, a simple page flip through some of my breakfast cereal history books here (yes, I have a shelf of breakfast cereal books, don’t judge me) and I discover that Graham Crackos were of course made of Graham and not oat, wheat and corn. And sometimes they weren’t little figures 8’s but actually looked like what an 8 would look like with an extra circle on it.

Crap.
Just like that, I’m doubting the very foundation of my cereal loving self. I honestly don’t know which of the two I’m remembering as my favorite cereal of all time. Was it C3PO’s? Or Graham Crackos?
I blame J.J. Abrams.